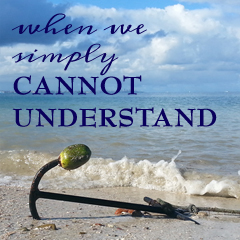 You prayed in faith, disregarding what others around you were saying.  You just knew that your prayers would bring results.  Unwavering, you awaited a response that never seemed to come.  Still your confidence remained unshaken, at least on the surface.  After all, faith will bring it to pass!  Right?  Of course God will come through in this situation!  Won’t He?  As you wait for a response, you find yourself in a time crunch, facing the prospect of having to make difficult decisions, in case the prayers remain unanswered.  If the answer to your prayer does not come soon, practicality reminds you that you will have to make a move that you have hoped to prolong.  Lord, what is happening here?  Where are You?

Suddenly, you awaken to a surreal, gut-wrenching realization.  You can wait no longer.  The time for decision has now fallen upon you, while your prayers seem to have hung in oblivion.  Are you conceding defeat, or are you simply making the decision that seems best?  How can you make these decisions and simultaneously claim to believe in faith?  What happened?  Where does the explanation lie?  Was it your fault?  Did you simply not have enough faith?  Or could it be that God chose not to respond for some reason?  Was there a reason that God seemed to withhold His Hand?

Every believer has been in a situation such as the one described here.  What happens next?  On the surface, you want to think that you are still a person of faith, but deeper down you cannot shake the nagging question of what went wrong.  Worse, you feel the need to explain, either for yourself or for God.  Perhaps you do not deem it necessary to offer explanations to friends and family, but if nothing more, your own heart is desperate for an adequate explanation that will somehow satisfy your lingering doubts.

When you find yourself in such a dilemma, there are a number of things you must do, purposefully and intentionally.  First, you must resist the urge to find a satisfactory explanation, because your search is confined to your own understanding.  In such a situation, your heart will tend to latch onto the first explanation that “makes sense,” out of desperation. Often, these explanations engage your intellect and human reason in a logical manner, but rarely do they align with the Word of God.  Before you know it, your theories morph themselves into a doctrine, and you begin believing things about God that contradict Scripture.  Some of the most damaging human doctrines have developed from attempts to offer a reasonable explanation for an experience.

How do we deal with life experiences that are contrary to the Word of God?  For most people, the idea of having no explanation to make sense of their experience is simply unacceptable.  The heart of man has an intuitive need to be able to sort life experiences into a logical framework, or simply put, to be able to ‘make sense’ of life.  Believers must be careful to avoid grasping at the first logical explanation, because doing so can form a heart belief.  Heart beliefs define the trajectory of one’s life and identity. For this reason, people who have been devout believers for years find themselves making unscriptural statements such as “God chose not to heal her,” or “Sometimes God’s answer is ‘No.'”  Where in Scripture did Jesus ever chose not to heal someone who came to Him seeking healing?  On the contrary, verses such as Matthew 12:15 and Luke 6:19 emphatically state that “He healed them all” [NKJV].  In the case of healing, Scripture has effectively debunked many of the assumed theories that God, for some reason, chose not to heal someone.  After all, Jesus only did what He saw His Father doing, and one who has seen Jesus has seen the Father (John 5:19, John 14:9).   What did Jesus do in Scripture?  He consistently healed them all!

Your intuitive need to be able to ‘make sense’ of everything may well take you to a place where you ultimately give credence to your own theories even above Scripture itself.  Therefore, you must rid yourself of the need to make sense of life, and embrace the freedom found in admitting that you simply have no explanation.  But the process does not end there!  Next, you must return to your defaults.  Rather than allowing your experiences to alter your core beliefs, go back to Scripture and reaffirm what you know to be true about the nature and character of God.  Then make a definitive determination in your heart that you absolutely refuse to lay aside what you know to be true simply because of what you cannot understand.

Hold firm to your default!  Let your default beliefs be an anchor in the storms of your life.  Live with the resolve that Shadrach, Meshach, and Abed-Nego exhibited in the third chapter of Daniel.  These three young Hebrew men boldly declared that God would deliver them from the hand of King Nebuchadnezzar.  Then, they went on to say, “but if not, let it be known to you, O king, that we do not serve your gods, nor will we worship the gold image which you have set up” [Daniel 3:18, NKJV].  What?   Were they negating their emphatic statement of faith when they said the words “but if not”?   Were they trying to give God an easy escape clause of some sort, in case He did not come through?  No!  Rather, they were expressing a predetermined resolve, which would remain their default regardless of what happened next.  Without such resolve, they would have caved in to fear as their bodies approached the ominous heat of the angry furnace.  Why is God allowing this to happen to us?  Were we wrong all this time?  Is our God even real, or are we delusional?   How did we end up in Babylon in the first place, if we were trusting in the God of Israel?   Thankfully, they seem to have ignored all of these distracting questions and instead held to their resolve.  What happened?  God delivered them!

So what are you going to do?  Are you going to question your core beliefs, or are you going to hold fast to your defaults? Are you going cast aside what you know to be true because of something that you cannot understand?  Or are you going to allow your default beliefs to anchor you in troubling times?  Life challenges will attempt to strip your beliefs as far as you will permit.  But you can continue believing, regardless of what happens.  As the Apostle Paul instructs in 1st Timothy 6:12, “fight the good fight of faith” [NKJV]. After an apparent defeat, you can say, “I don’t know what just happened, but I know that God is good, that He loves me, and that He never withholds any good thing from me.”

Even when it appears that your faith is simply not working for you, purposefully default to believing and rejoicing in Him.  Live in the manner that Habakkuk 3:17-18 describes, where Habakkuk resolutely declares, “Though the fig tree may not blossom, nor fruit be on the vines; though the labor of the olive may fail, and the fields yield no food; though the flock may be cut off from the fold, and there be no herd in the stalls— yet I will rejoice in the Lord, I will joy in the God of my salvation” [NKJV].  Have the same attitude that Shadrach, Meshach, and Abed-Nego maintained, believing that GOD will come through for you, but even if He does not, you will not bow to doubt and unbelief.  Have the resolve that Esther exhibited when she determined that she would trust God and then added, “If I perish, I perish”  [NKJV].  Enough said!  Who needs any further explanation?  It is not your job to explain any experience.  Resolve in your heart that your only job is to trust the Lord, and to believe His Word.  In such a place of resolve, faith is free to work without competing with scruples, fears, or questions of “what if“.

When your faith has seemed to fail, hold on to what you know to be true, and eventually the understanding will come by the revelation of the Holy Spirit.  You will often find that the explanation is quite simple.  For instance, many times people have assumed that God was allowing affliction in their life.  It only makes sense to say that the one with authority is allowing it, right?  But a careful reading of Luke 10:19 reveals that the Lord has given you authority!  So, yes, someone with authority is allowing it, but could it be that one permitting the affliction to continue is you, if in fact the Scripture rightly teaches that the Lord has conferred authority upon you?  Instead of assuming that God is allowing your suffering, ask Him to teach you how to use your authority in Christ!  Build from what you know is true. Use the truth you know as a default starting point.

Finally, when all is said and done, do not live regretting lost battles.  Simply believe that God restores all that you have lost, and at the end of it all, regardless of how things seem at the present, your testimony will be a brilliant masterpiece.  Why?  Because, despite the things that make no sense, you know in the depths of your being that you serve a good God who loves you, who is carrying you, and who has your best interest at heart.  Come to a place where no life experience can ever dissuade your heart of that fundamental truth.  If you hold firm to such a position, despite any lost battle along the way, you will remain victorious in the good fight of faith.